It seems like such a good idea when you say it out loud with your feet up in the living room. Finish your big project at work and immediately get on a plane for the ends of the earth, but what it means is that, sleep-deprived and frayed, you’re taking a faith fall backwards into the arms of the global transportation system. I tried to see it as a game with levels to unlock, but even then somewhere in the middle I freaked out that I wasn’t going to make it.

I will describe it in brief as:

All dancing on the head of a pin because if I missed a connection, I was in danger of missing the boat in Honiara. Though if I missed the plane in Brisbane, there was another connection, Brisbane to Cairns to Port Moresby, Papua New Guinea, to Honiara that would get me there 10 minutes before the boat left if all the connections were on-time. I mean, did I really want to get to Honiara so bad I would buy a 3rd ticket to get there?

Fortunately, that was not needed.

I left San Francisco on a Saturday afternoon, arriving in Honiara Monday afternoon. Immediately went to the hotel, which on the web looked like a lovely upscale resort, but I would describe as a hotel that had seen better days. The pool empty, the rooms faded and worn, the bar did not know how to make any cocktails. None of which mattered because all I wanted to do was face-plant on the bed and enjoy the lack of internet connection. I was beyond the tentacles of a job that never lets me go.

I will mention that landing in Honiara, the cabin of the plane was filled with the most amazing sweet-green-flowery-tropic scent. I peered out the window to try to figure out where the smell was coming from and only saw the coconut plantations and scattered homes. By the time we landed in Honiara at the airport, it was gone, replaced by the smell of JP5 jet fuel and diesel. But it was an amazing smell, the kind of scent you’d want to roll in, the kind of scent you would follow home. And I have no clue what it was.

The next day they took us on a short tour in a van around town to fill the time while the boat was cleaned and restocked from the previous set of passengers. And you’re going to have to forgive my ignorance that I had been so focused on getting to Honiara that I had not realized that this island was Guadalcanal. Guadalcanal was a major battle in World War II, 6 months of hard fought combat, one of the important victories in turning the tide against the Japanese. There’s not a lot of evidence left of the war because the main town of Honiara was built on top of the battle site.

The first item on the itinerary was the 15 minute drive up and down the main street, so we could see the town and get the overview talk. 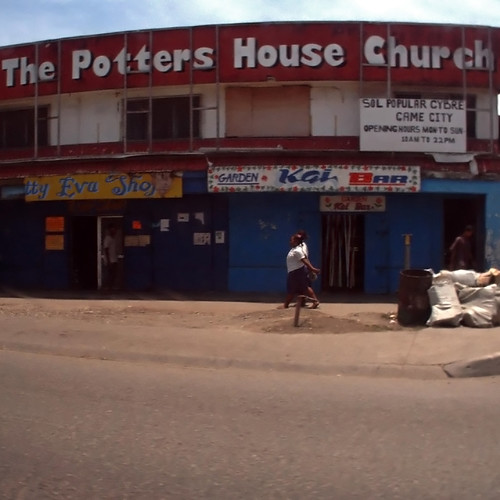 I had a number of photo taking devices with me. One of which is a little stick camera called an Autographer. You clip it on and it takes a picture automatically every 15 minutes or so, as well as a GPS reading so that you have a map of where you’ve been. All the square images you’ll see in these pages were taken with the Autographer. Most of the images are crap but once or twice a day you get something that is interesting and not something that you would taken a picture of. 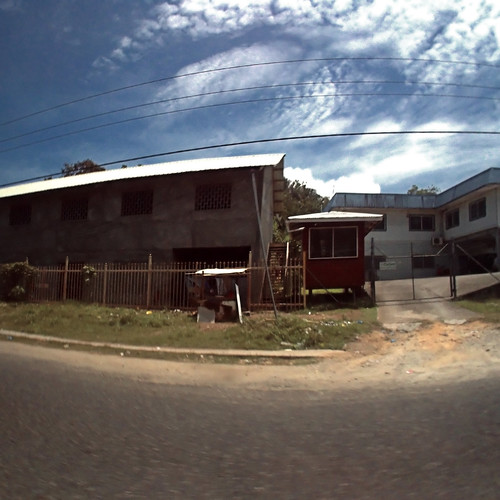 One thing you will notice in this shot is the fence and guard hut. Apparently (because of previous troubles), all foreign owned property is required to have a security fence and a 24 hour guard.

The first stop on the tour was the market. Where the local guide with us, immediately grabbed me when he saw my camera (even thought it was a little point and shoot, not the big DSLR) and said, don’t just walk up and take pictures of people. And I said, yeah, yeah, I know the locals aren’t animals in a zoo, you have to talk to people. But in my head I’m thinking — oh gawd, no. Not another one of these trips where the locals hate cameras. 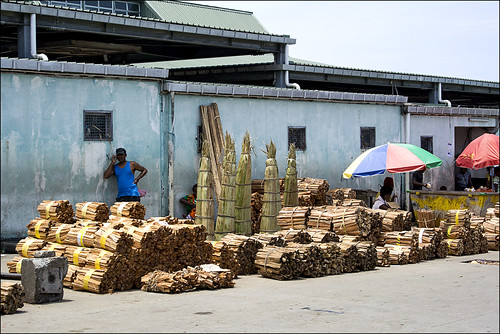 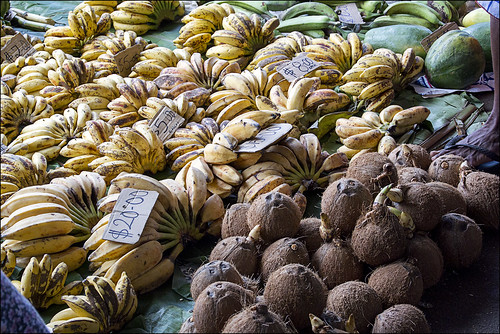 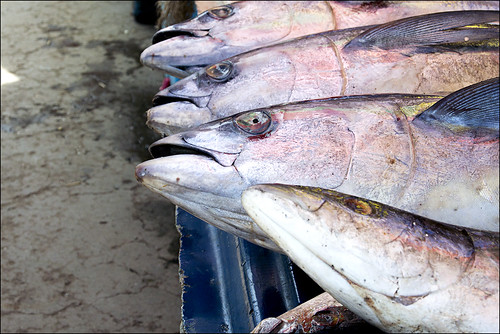 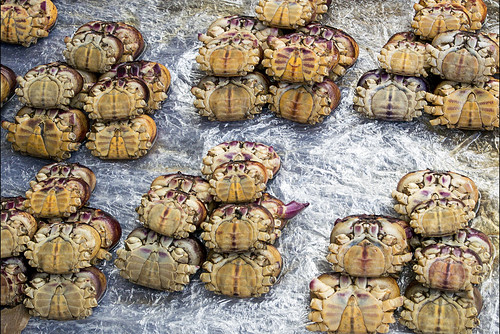 The market was up against the sea and docks and we saw the first of many decaying shipwrecks. Almost every island we visited on the trip had a broken boat along its shores. They do have fierce storms out here and the cost of removing a shipwreck is obviously not worth the scrape metal recovery costs. 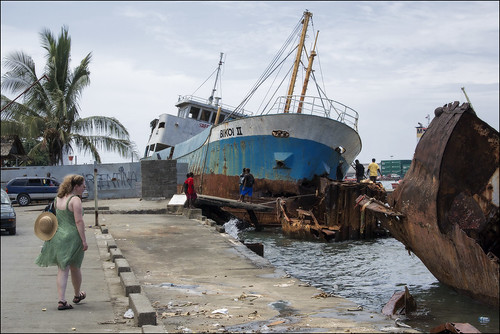 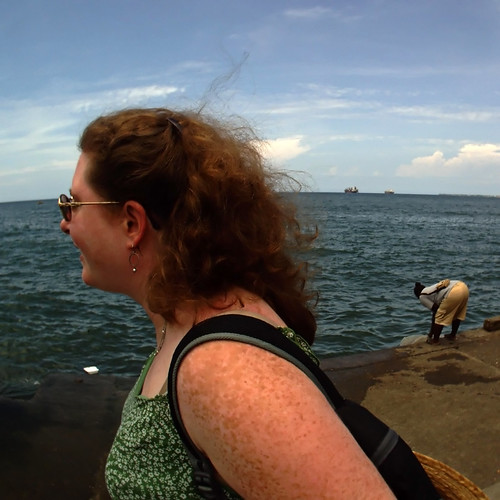 My cabin mate for the trip was Gretchin from Portland. I’ve already talked about how she happened to come along for the ride.

The next stops on the tour were the Relic Museum at Betikama Seventh Day Adventist school where some of the wreckage from the war was laid out, the Parliament building, the Guadalcanal war memorial with its prerequisite grave of the unknown soldier (though since the war memorial went up they have taken DNA from the bones and determined who the soldier was), and a drive through the port with its enormous piles of trees (lumber being a big export for the Solomon Islands). 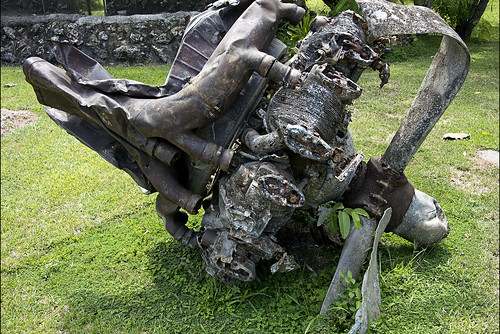 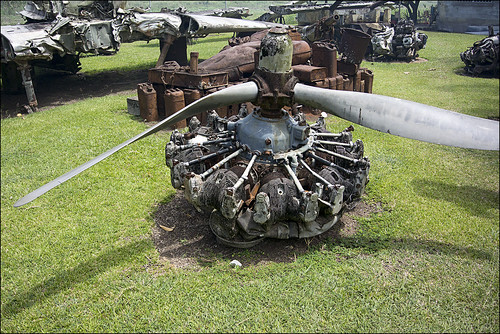 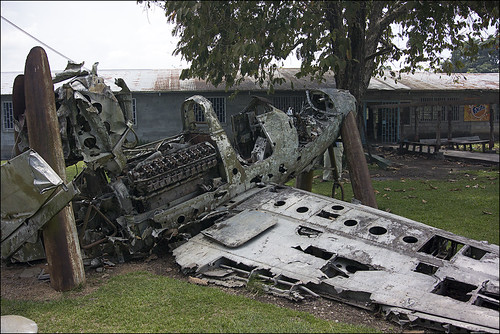 Can I just say these planes look they were made out of frigging tissue paper? 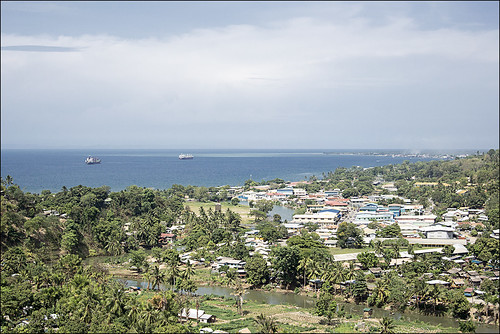 From here we were taken to the boat in zodiacs and settled in.